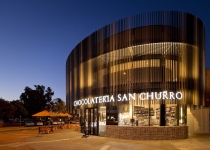 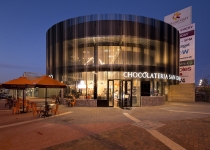 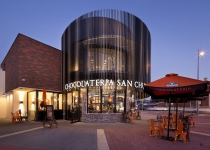 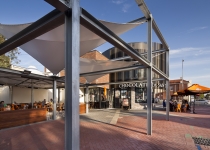 In May 2014 PS Structures were awarded the contract to carry out the works at the Midland Gate Shopping Centre.

The Scope of Works included the demolition of existing tenancy spaces and construction of 7 (Seven) ‘New Specialty Stores’. The works were challenging in that all planning had to be done with consideration of minimising any impact on the operations of the functioning centre as well as to the general public. Deliveries and heavy crane lifts had to be scheduled out of trading hours which were 8am to 9pm, 6 days a week.

The tenancy store works had a few significant scope increases in the form of mechanical ductwork, all ‘Target’ facing walls required additional timber studwork to meet the shelving spacing and a structural steel addition to create a ceiling in a tenancy located underneath a skylight in the mall.

Hard and soft landscaping works to the area known as the ‘Grassy Knoll’ were relatively straightforward requiring the conversion of a parking area into a landscaped park.

Target Store Works’ and services upgrades included the replacement of the fire sprinkler installation to the mezzanine storage area and lay-by area, as well as the replacement of two roof top chillers and related mechanical equipment in the plant room. The fire sprinkler works were co‐ordinated to maintain store operations while the works were being carried out. The completion date of these works was pushed out to accommodate the Christmas Season and were completed in February 2015. In addition to the sprinkler pipe replacement, the fire system upgrade included a 360,000 litre water tank and twin diesel pump set to replace the existing system. The 6.5m high in‐situ concrete walls were a challenge to build in a tight space between a laneway and operational car park.

The mechanical installation, which included the demolition and removal of the existing equipment, had to be done in stages to maintain cooling capacity to the store. One chiller and related pumps and equipment were removed as the first new chiller system was installed and commissioned. Once operational the second unit was replaced.

The Cale Street Café, earmarked for a San Churro tenancy, is a unique oval shaped free standing steel framed structure, with faceted glass shopfronts and an external seating area under shade sails and hard landscaping. With its curved aluminium fin cladding arranged in 6 different colours was not a straightforward build, but has come together exceptionally well, and will be a significant landmark in the area. The project was placed on hold for approximately 3 months while the landlord negotiated changes to the structure with the tenant.

All works were completed within the required programme deadlines and PS Structures are on track to hand over the cafe on time.

“I wish to extend a genuine thank you for the work done for the Target works and the Café. I am sure that you will agree with me when I say that the Café is absolutely beautiful and looks amazing. PS Structures managed to maintain the intent of the building under interesting circumstances and that speaks volumes for us”