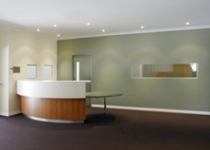 The Department of Housing and Works Project was split into 2 separated stages over a 33 week period. Stage 1 was a new resource building and associated external works and stage 2 was the demolition of an existing building for a new carpark.

The construction of a single storey resource centre within the vicinity of an existing carpark. The building was constructed in structural steel with a timber trussed roof. The layout included a large reception with smaller offices, waiting and consulting rooms; these were combined with medical suites and attached ensuites; the building also included group rooms, kitchen, private and public toilet facilities.

CLIENT:
DEPARTMENT OF HOUSING AND WORKS