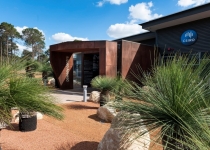 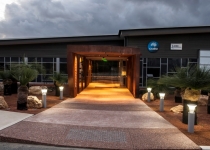 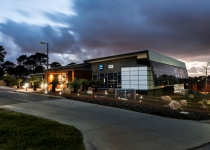 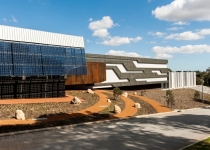 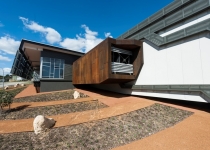 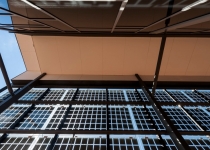 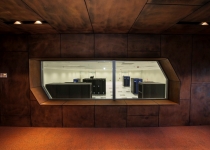 The Pawsey Centre will provides supercomputing and research services to the research community, as well as to commercial organisations and government agencies. Application areas serviced will include radio astronomy, nanotechnology, geosciences, high energy physics, life sciences and other sectors with high level computational needs.
The project site is located at Lot 15, Burvill Court, Kensington, WA approximately 6km from the Perth CBD. This site is owned by CSIRO in freehold title and sits adjacent other CSIRO properties, forming a greater campus facility.

The Pawsey Supercomputing Centre accommodates approximately 6,000m2 of the 2 hectare site, situated in the north eastern corner. The site has significant level variations with falls across the northern boundary in the order of 10m. The building floor levels have been set to take advantage of the existing landform to ensure an efficient use of the available land.

Supporting the need for high end research computing the 4,500m2 facility accommodates a 1,000m2 computer hall above a 1,300 m2 basement.  The computer hall is supported by a 1150 m2 detached annex plant building. The computer hall will house a computer system that is comparable to the worlds top supercomputer and will aim to meet best practise energy efficient targets.  The Computer hall comprises three separate cells with distinct temperature and humidity profiles.  With all high performance computer systems, a critical aspect is energy usage.  The building proposal utilises a combination of air cooling with chilled water technology to meet the significant cooling demand.

A public outreach exhibition space wraps the northern facade to provide a strong public presence. This space will display material relative to the supercomputer and science projects by way of both static and audio / visual means. The space will support varying visitor groups including scientists, dignitaries and school children’s excursions.

The project incorporates a component of office accommodation with conference room and amenities which will provide best practise for internal environment quality, including access to views and natural light, natural ventilation and worker / staff comfort.

An access road has been provided to the south of the building to enable access to the unloading areas, service areas and plant rooms. This road also enables access at grade for FESA vehicles, Western Power personnel and CSIRO staff to all plant and equipment for general maintenance and call outs.

“We were very pleased and enjoyed working with PS Structures, their friendly helpful approach to get the job done was great.”